From Superlap in 2008 to the current World Time Attack in 2013, the event format has undergone numerous changes to try and incorporate all walks of Motorsport life. This year, spectators are introduced to a flurry of activity across multiple areas of Sydney Motorsport Park. The largest difference layout wise with the Drifters being relocated to the South Circuit area and the introduction of the new Turbosmart Flying 500 event on the main straight of the GP Circuit. But most important to the Time Attack competitors amongst a number of class rule changes was the introduction of 2 control tyres, Advan’s new street tyre the AD08R and their renowned semi-slick compound A050. This took Yokohama’s 2012 rivals – Hankook and others off the tyre menu. 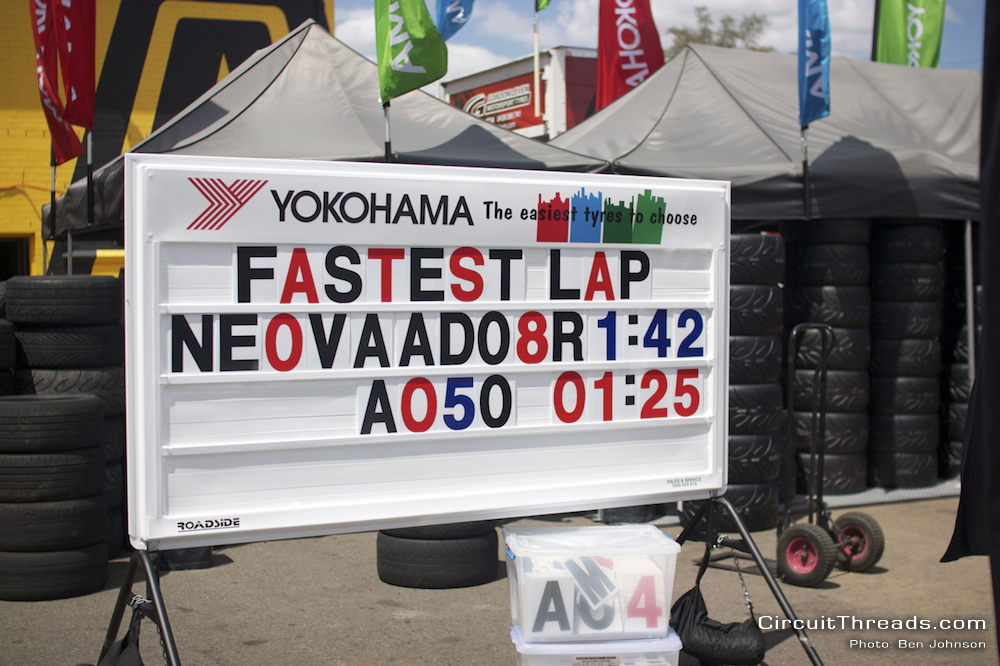 With practice on the Thursday, the Friday (in true racing fashion) unfortunately proved problematic for a number competitors. From the Japan visitors – the Top Fuel/Voltex S2000 ran into engine problems – deciding to not waste any time and swap out their motor entirely to hopefully grasp a podium position on the following day. 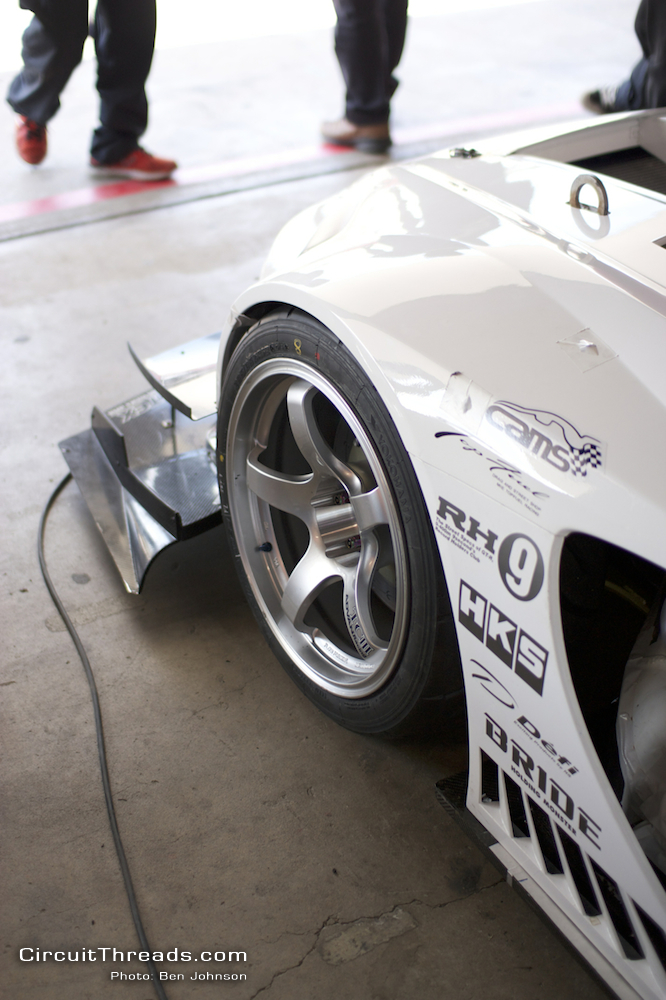 RE Amemiya’s Hurricane RX7 was already plagued with aero and engine issues before landing on Australian shores putting the team on the back foot in a rush to resolve them for the event. 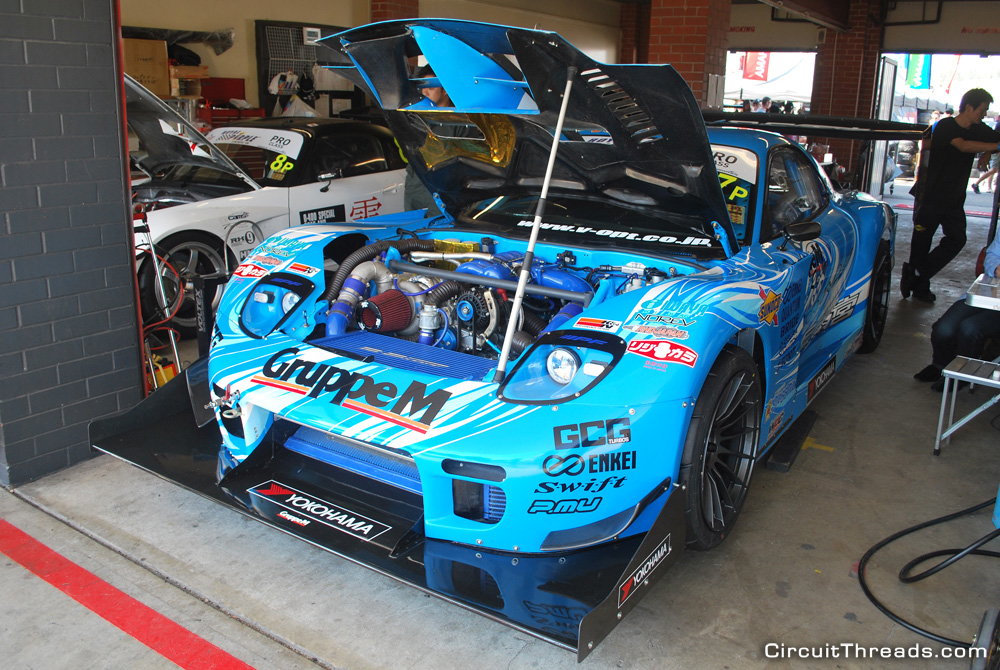 The ever humble privateer Under Suzuki and his trademark carbon black Scorch Racing S15 was no stranger to problems either, encountering engine issues on the day. Despite being incredibly busy, he was always happy to put on a smile and pose with numerous giddy fans. 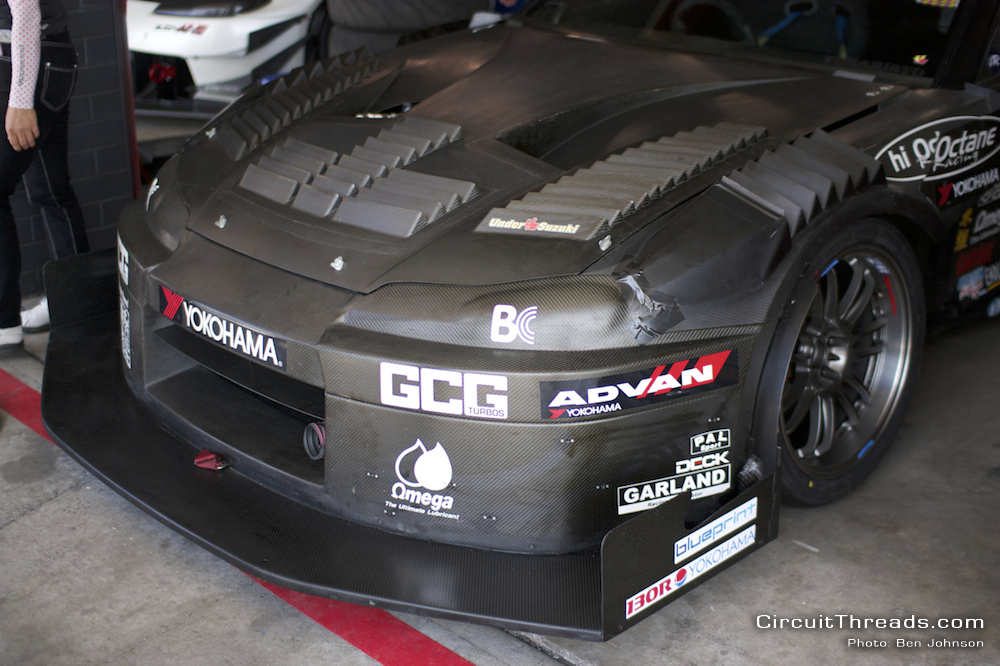 In a continuing trend, other local Pro class teams suffered similar problems with 2012 WTAC Champion – Nemo Racing running into overheating problems of their own. Stealing the show was the Tilton Interiors Evo from a successful campaign in Super Lap country of origin – Japan. Having already proved itself at Tsukuba circuit, it continued to display the results of a well set up package on home soil. On the first day it bumped Nemo off as record holder to post an incredible 1:24.85 in the skilful hands of Garth Walden. 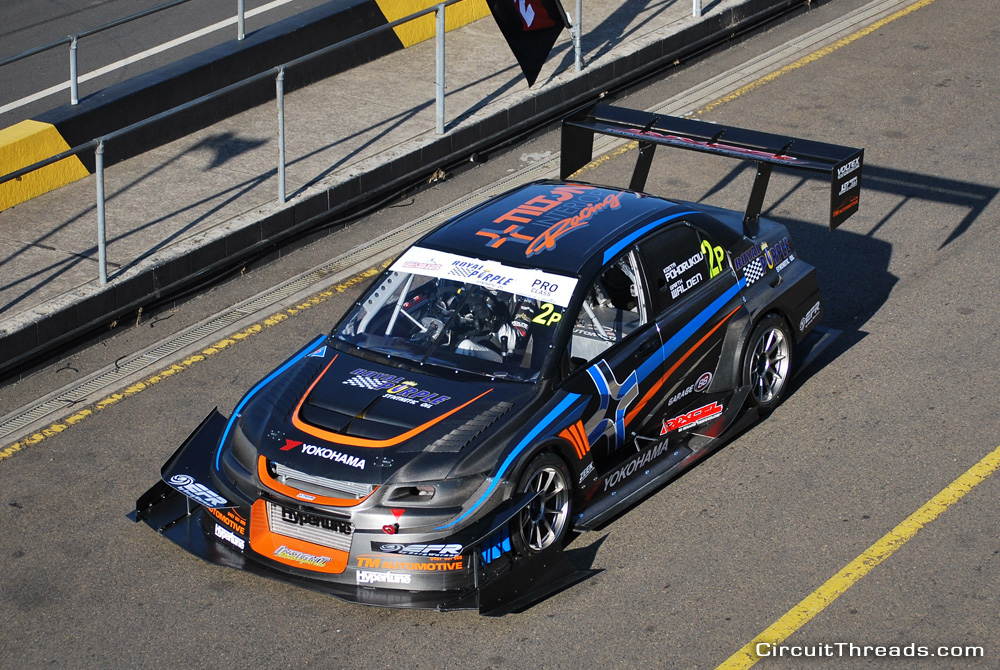 Closer to home in Clubsprint class was Victoria’s John Richardson’s Nissan R33 GTS-T which ran into boost issues carried over from the practice day. His determined team worked throughout the night – replacing a number of components in an attempt to fix the issue. In what revealed itself to be a cooler pipe leak halfway through the Friday, the problem was soon addressed and with limited laps in the day – John posted a 1:42.89 for the day but in the end finished 5th in Clubsprint class with a 1:42.05. John’s shoestring budget Skyline is no stranger at Melbourne track days – posting some very quick times which some would only associate with a 4WD drivetrain. Hopefully we see John pilot the Skyline to a podium position in 2014. 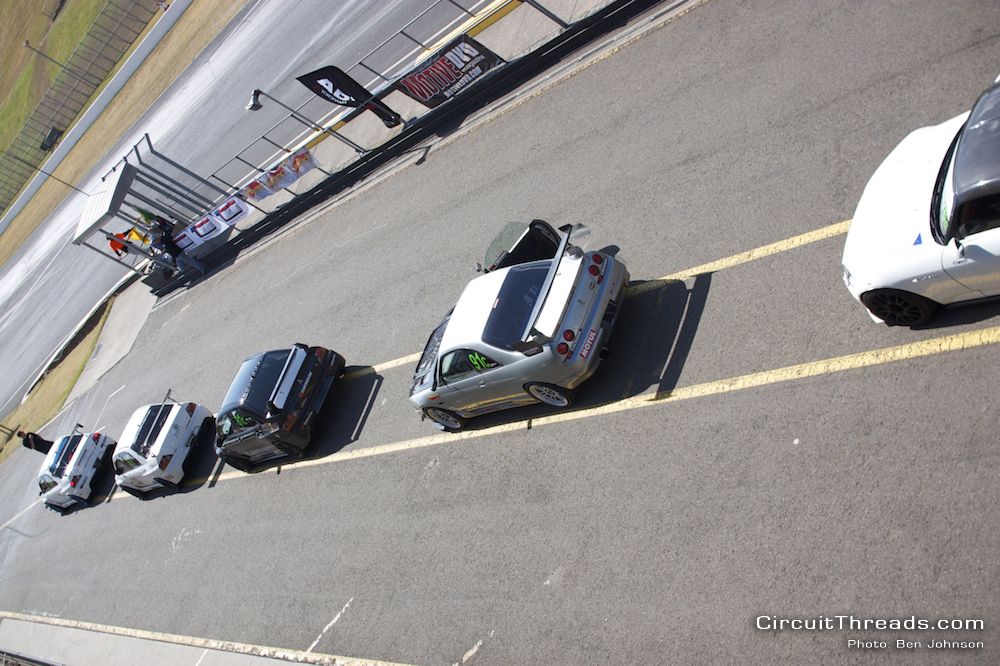 On the opposite end of the Sydney Motorsport Park in Drifting – Victoria’s Catherine “Drift Cat” Coleiro was experiencing issues of her own. Her newly built VK Commodore was ominously labelled with the number 13 and not long after Thursday’s practice suffered a broken tie rod. Unfortunately this soon developed into a trend – with the gearbox eating itself and not long after it’s replacement, the differential pinion followed suit. The crew from Chequered Tuning put in countless hours to swap out the failed components only to then run into steering problems turning the VK into a sideways monster with Cat fighting for control throughout her remaining sessions. Infamous Daigo Saito who had taken an earlier interest in the ADM machine, went to steer the VK in a run and helped confirm the steering as being the culprit. By this stage to much disappointment, Cat had already been forced out of the Drift competition. Luckily for the spectators, Cat has already vowed to make a return in 2014. 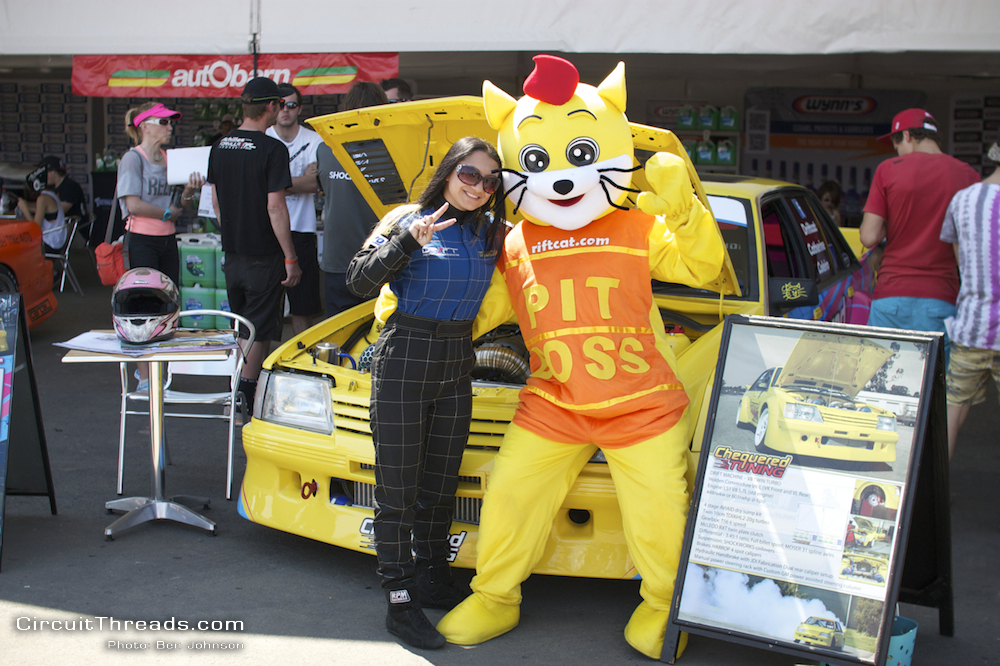 To great dismay, other Victorian entrants also ran into their own assortment of trouble with Road Track Rally’s Evolution X coming off the track on the Friday crashing which ended their 2013 attempt for podium in Clubsprint. Thankfully without any major injuries Darrin still clocked a 1:42.51 earlier securing his position under John Richardson with 6th.

The Insane Drifters despite an awesome display throughout both days, neither driver had the complete run they were hoping for. Aggess was unable to fix some car problems of his own in the limited time given and subsequently forced to retire. Papa in his run against Mad Mike encountered a questionable decision that eliminated him from the competition. 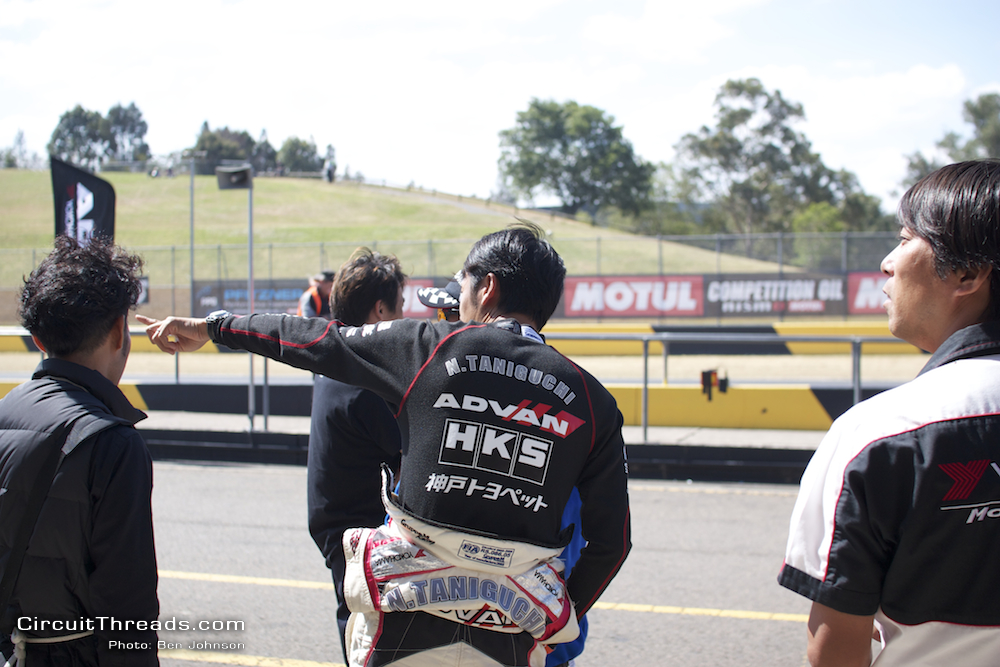 With so much happening over the weekend, there was still plenty of racing and action to come. Stay tuned for our final wrap up of WTAC 2013 coming very soon!

Make sure this account has posts available on instagram.com.