If you’re a Nissan fan, then you’ve heard of the legendary Nismo Omori Factory. This is the place where highly skilled engineers and mechanics turned some of Nissan’s greatest cars into masterpiece special editions like the Nismo 400R, Nismo Z 380RS and the most sought after Nismo R34 GTR Z Tune. Classic parts every Nissan owner has once lusted over were also conceived here…think parts like the signature black Omori Spec LMGT4s or the chunky Nismo GTR strut braces crafted out of titanium.

Even when we first visited it many years ago, it looked more like a tired office building than the home of one of the world’s most successful motorsports divisions. 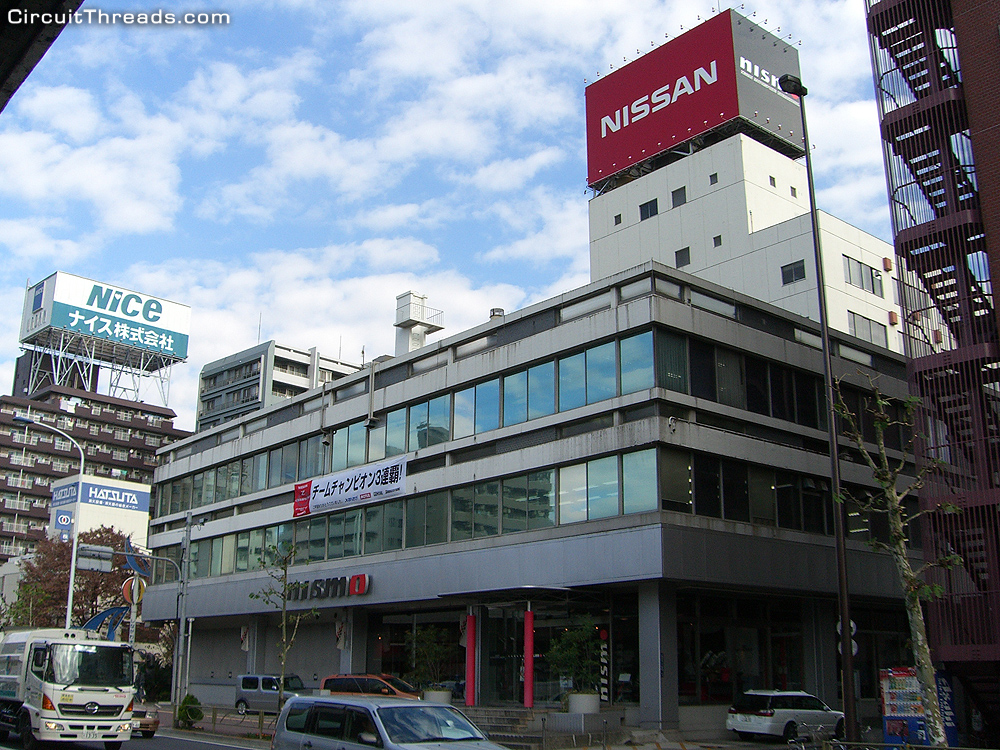 That’s why in 2013, Nismo moved its HQ from the Omori district to its current state of the art facilities in Yokohama and on our recent trip to Japan it was on top of our must see places to visit. A tip to anyone planning a visit to a workshop or factory in Japan…check the opening hours thoroughly and regularly! My planned visit to the new Nismo HQ fell on a Tuesday, which as I was staring through a closed front door found out that only a week beforehand Nismo had implemented a change to their opening hours and the shop was now closed on Mondays and Tuesdays! 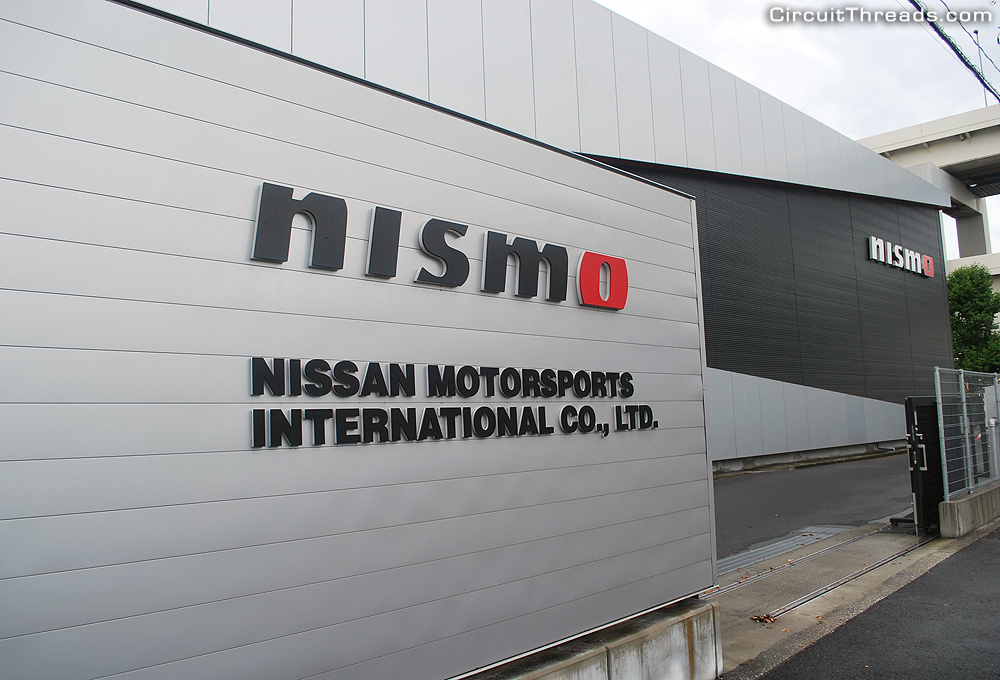 As I was flying out the next day, this only left me with a small opportunity to make another quick visit in the morning. Luckily the new HQ are easy enough to get to and I was back just before they opened at 10am. Leave a comment below if you’re planning a visit and would like help with directions. As I stepped into the car park, I knew the effort was well worth it! A slew of Nismo edition cars were parked out front all dressed in white and Nismo exterior enhancements.

While the 370 oozed with appeal sitting in the first parking spot. 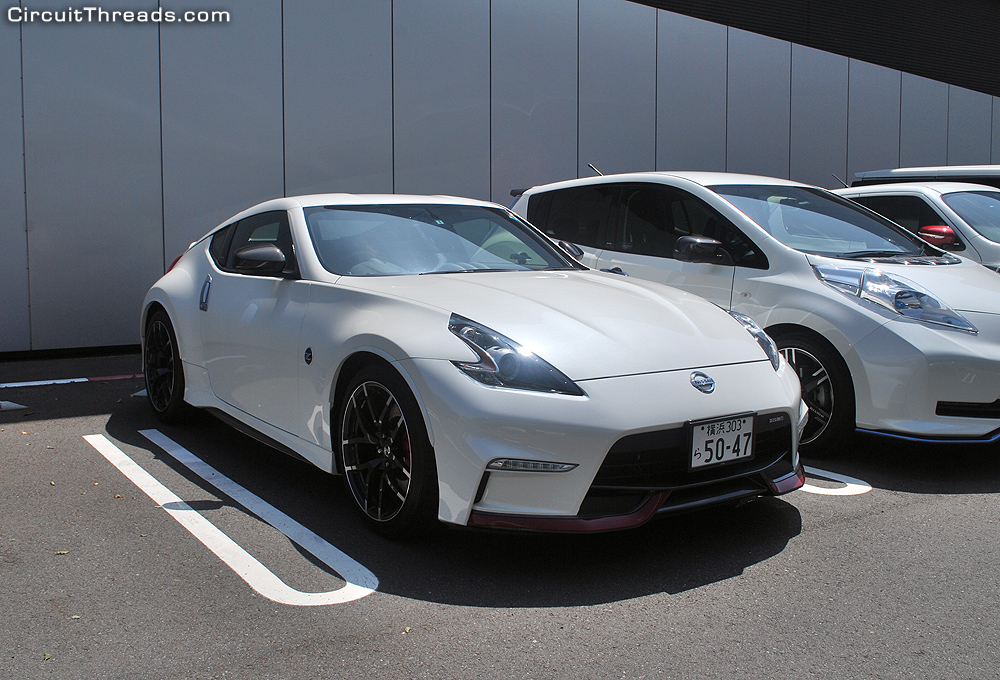 Every Nissan owner knows it’s so much more than just a badge! 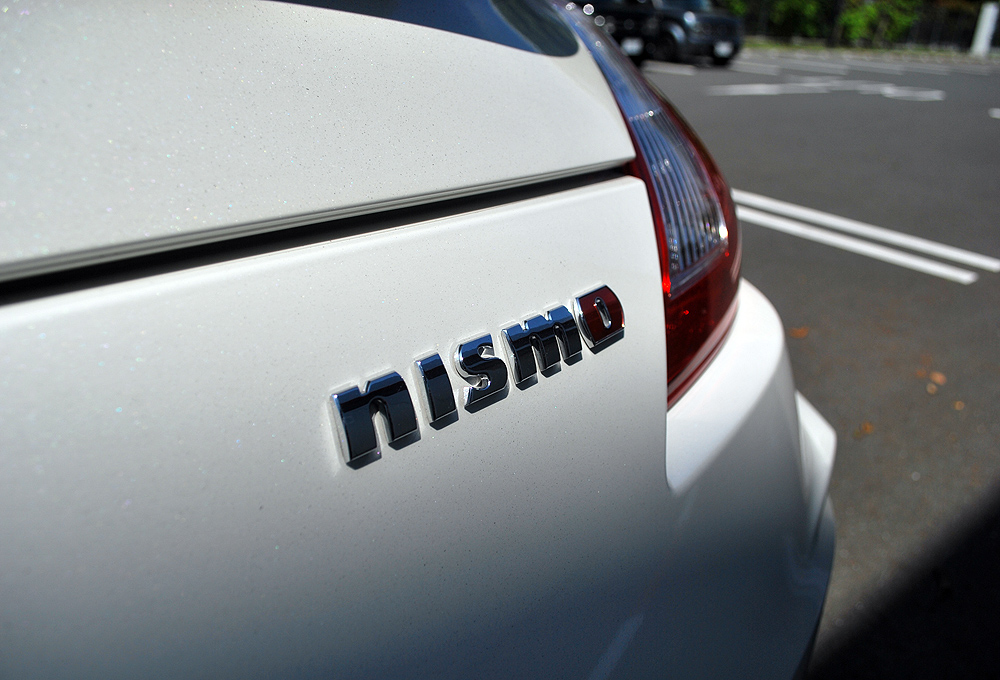 But when we heard the burble from the exhaust sound that could easily be identified as an RB note we swung around to see this stunning R34 GTR fitted with some of the best Nismo products like the Z Tune front bumper and guards. 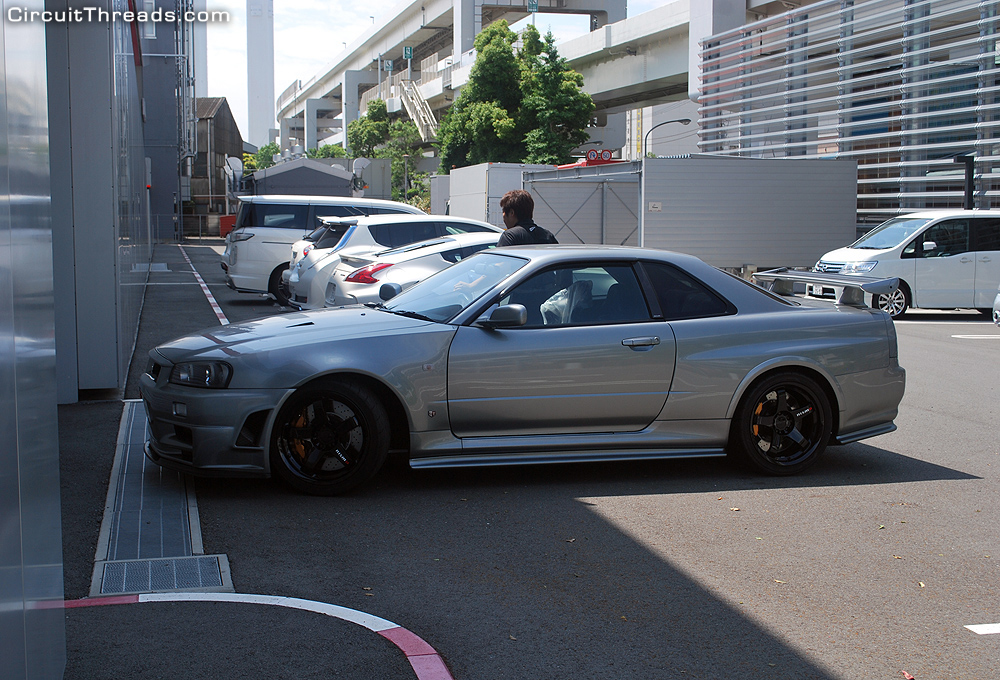 While it wasn’t one of the original Z Tune vehicles, it was still a very limited production Vspec II Nur. 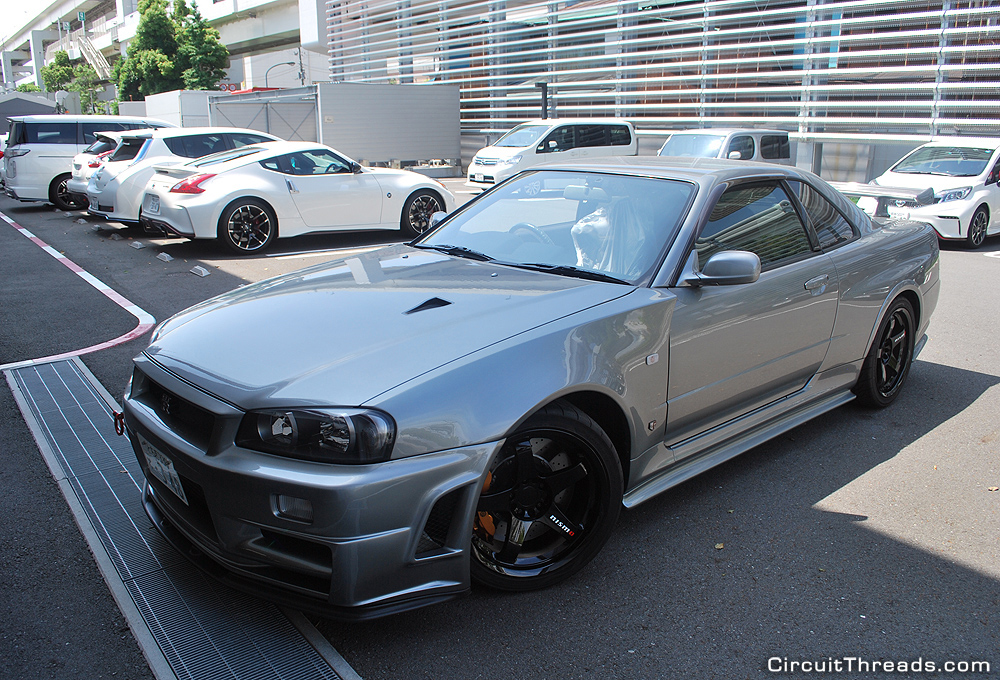 While we could have spent more time oogling what was in the car park, I was racing against the clock and had to make a move inside the Nismo Showroom which Nismo displays past and present race cars or their road going cars. The display cars rotate regularly so you can keep an eye out on the Nismo Showroom website for information on their latest displays. 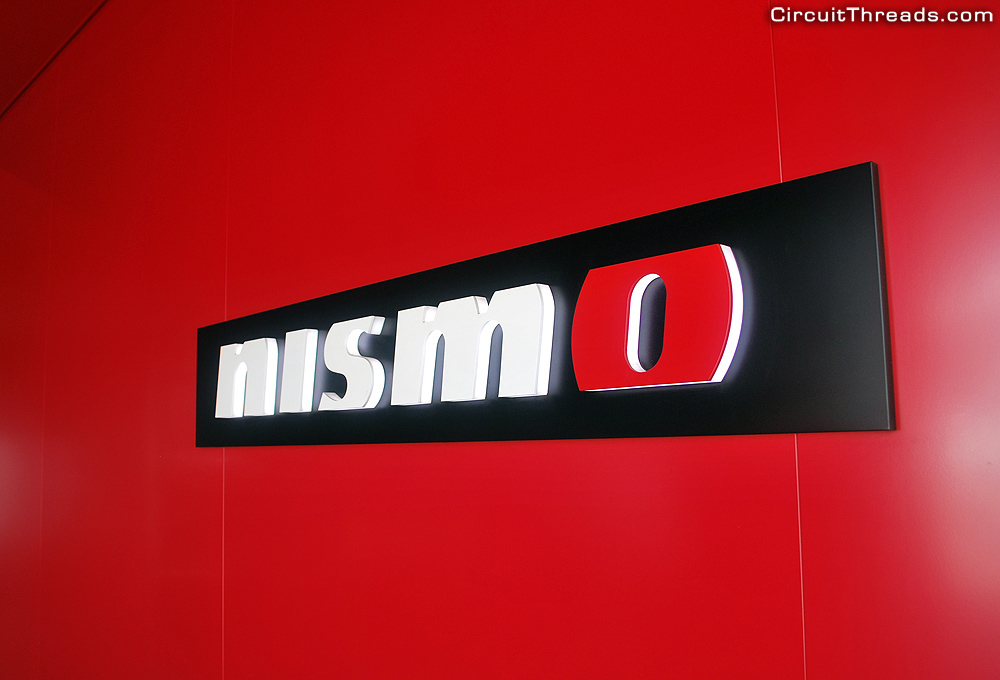 On this occasion we were lucky enough to see what could be (and we hope) one of their future cars – The Nismo Nissan IDx Concept. The IDx is one of Nissan’s latest concepts that pitches at the affordable RWD drive phenom started by the Toyota 86/Subaru BRZ. 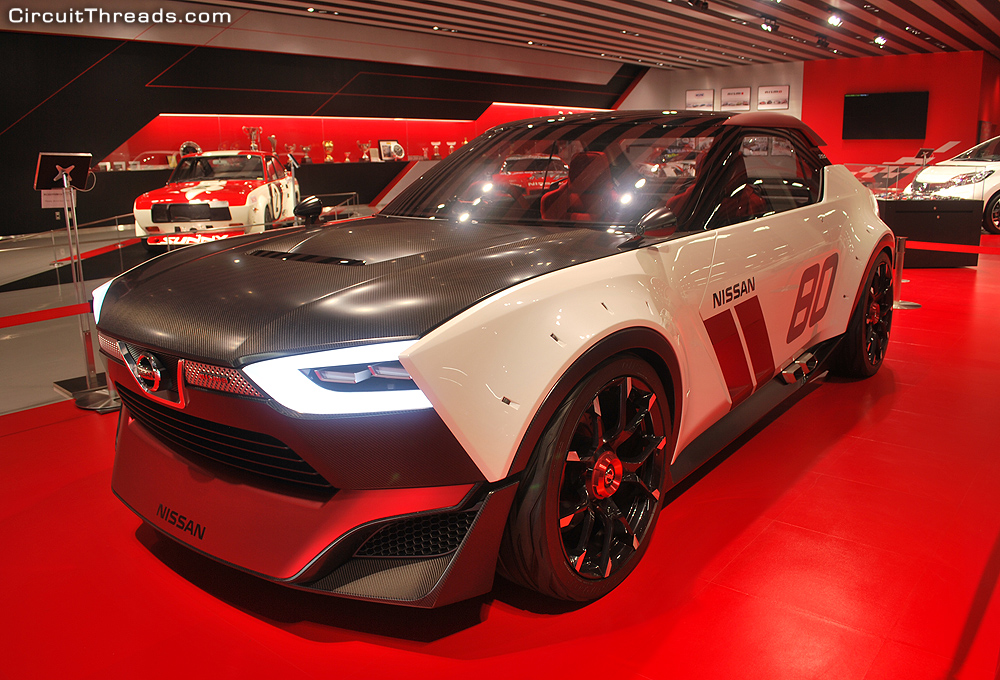 The Nismo version could be powered by a 1.6-litre turbo which makes 140kW and 240Nm. That would be pretty decent for a car that’s roughly only 4.1m long and 1.7m wide. 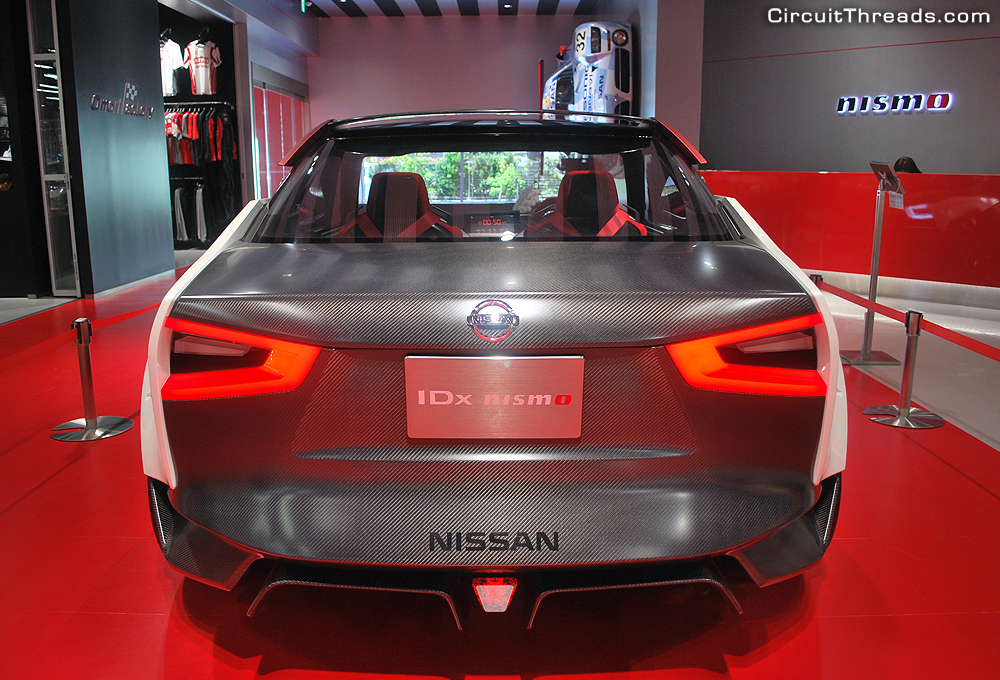 While the old school livery on the concept was cool, nothing beats the originals and it was great seeing this original Datsun Sunny cleaned up for the showroom. This actual car won the TS race in the 1973 Japan GP after Nissan introduced the ‘Excellent’ model to beat the Toyota Celicas and Sprinters . 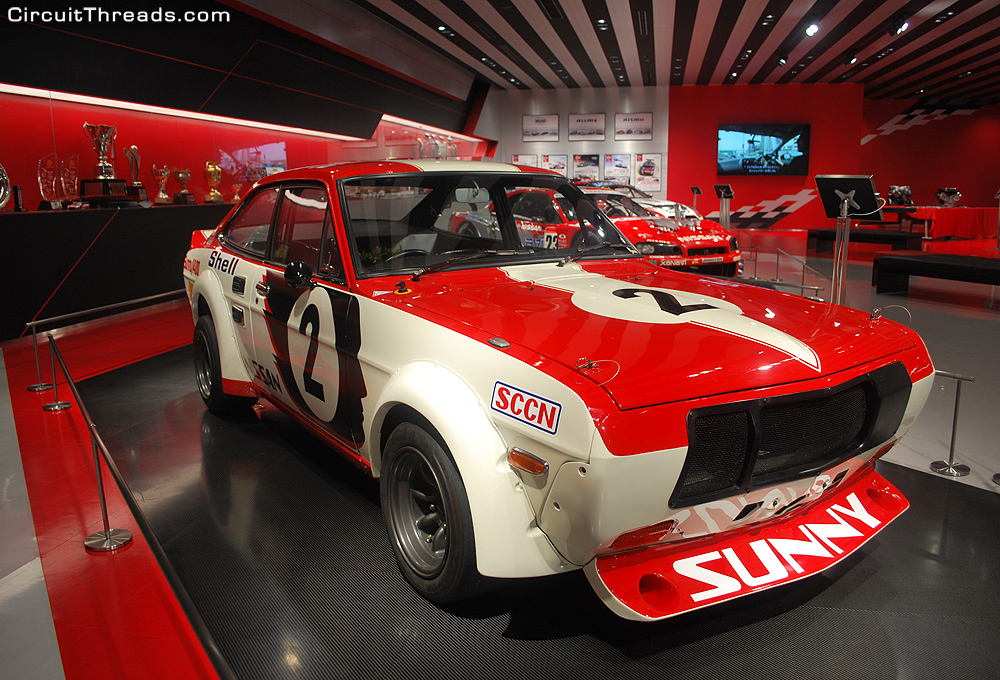 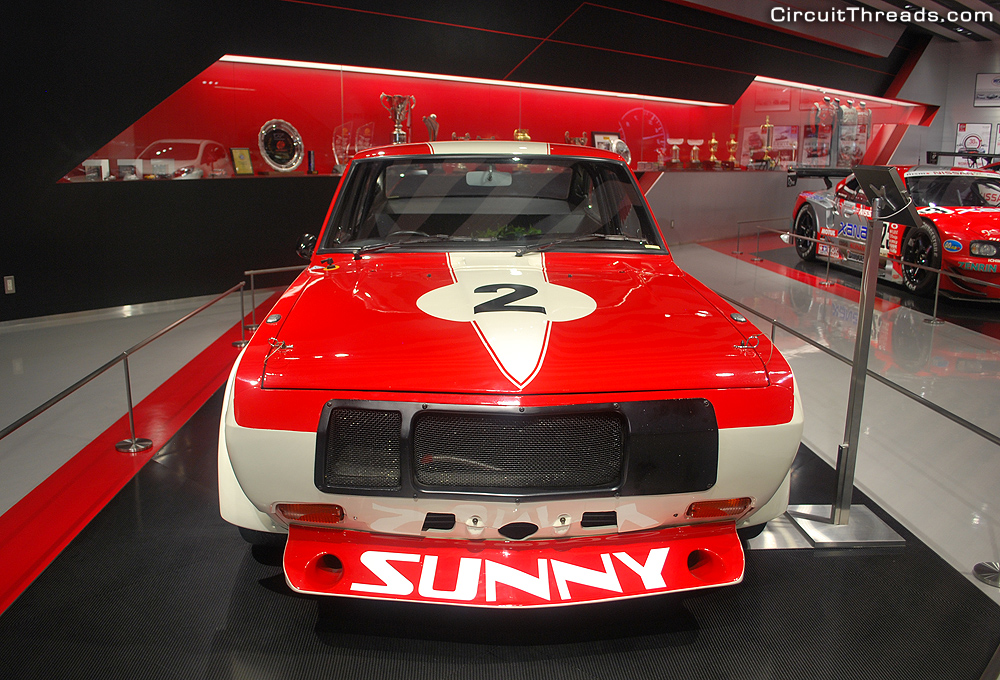 By far, the most famous model in the Nissan lineup though is the R34 GTR, which looks menacing in race trim and they don’t get any more iconic than the Xanavi Nismo R34. 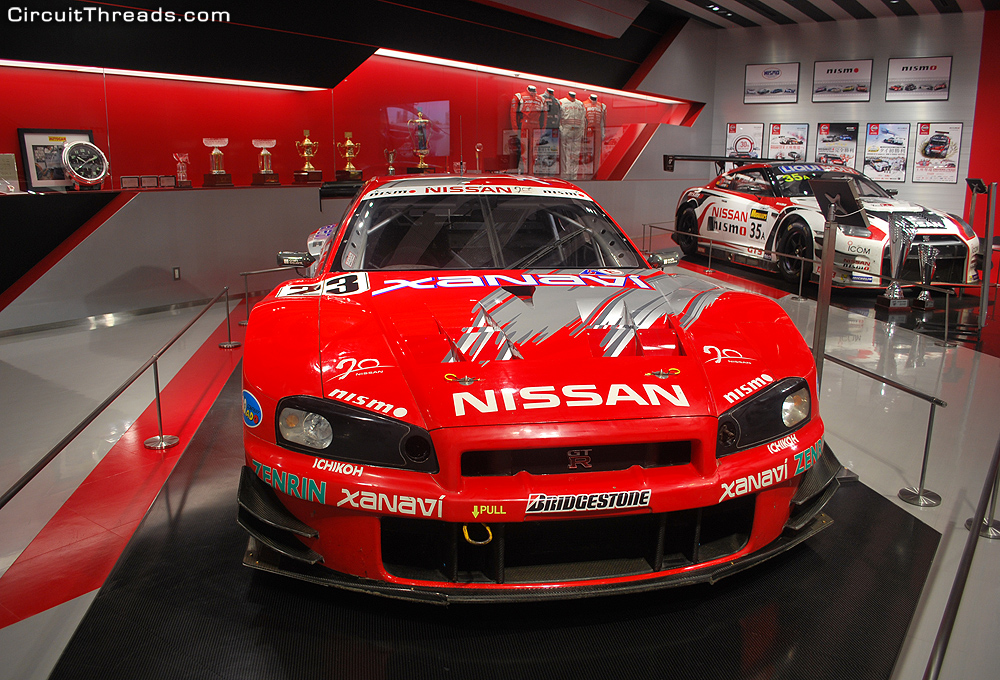 The #23 car competed in the JGTC series and won the GT500 championship in its final year in 2003. 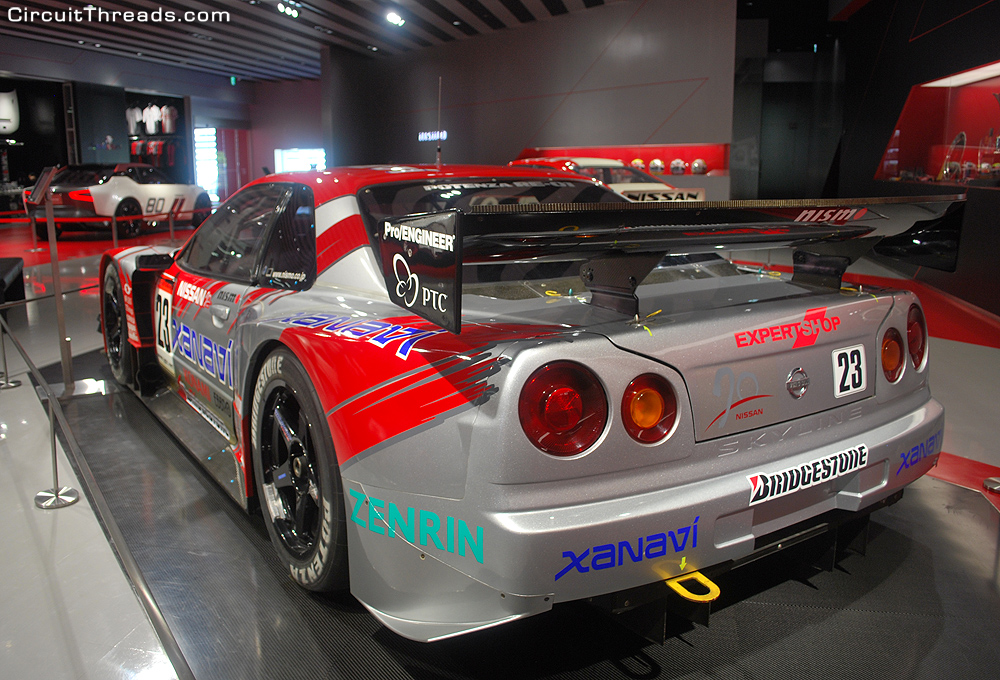 While it didn’t actually win any races throughout the 2003 season, the consistency of drivers Satoshi Motoyama and Michael Krumm ultimately lead to the championship. 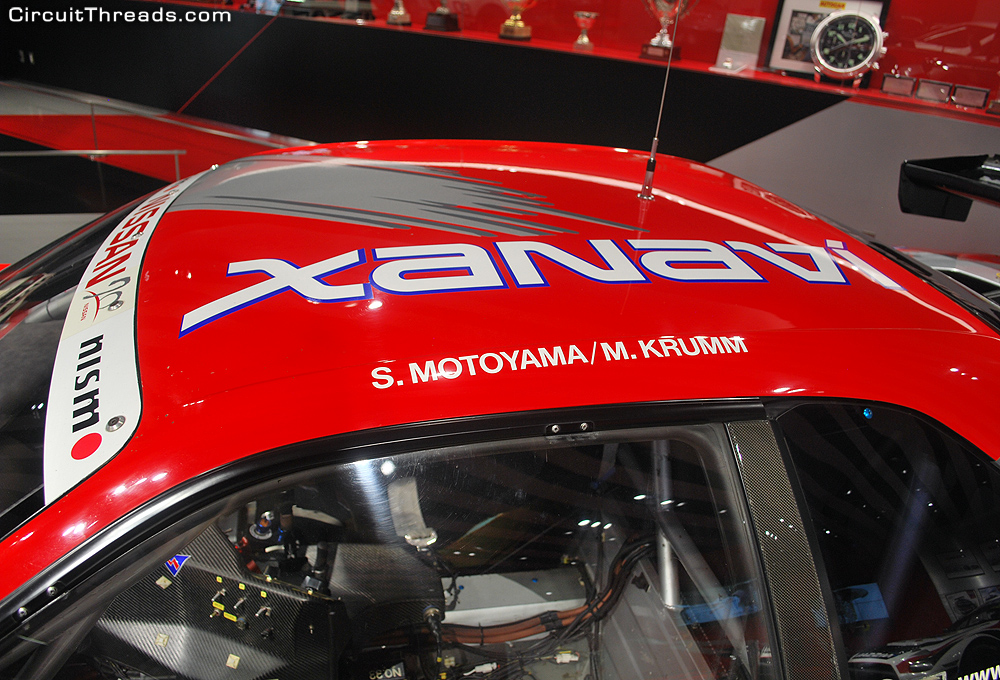 Once race car parts only, its great to see parts like the Craft Square mirrors filter through to the aftermarket where you or I could buy a set for our own cars (that’s if you’ve got a spare few hundred dollars!). 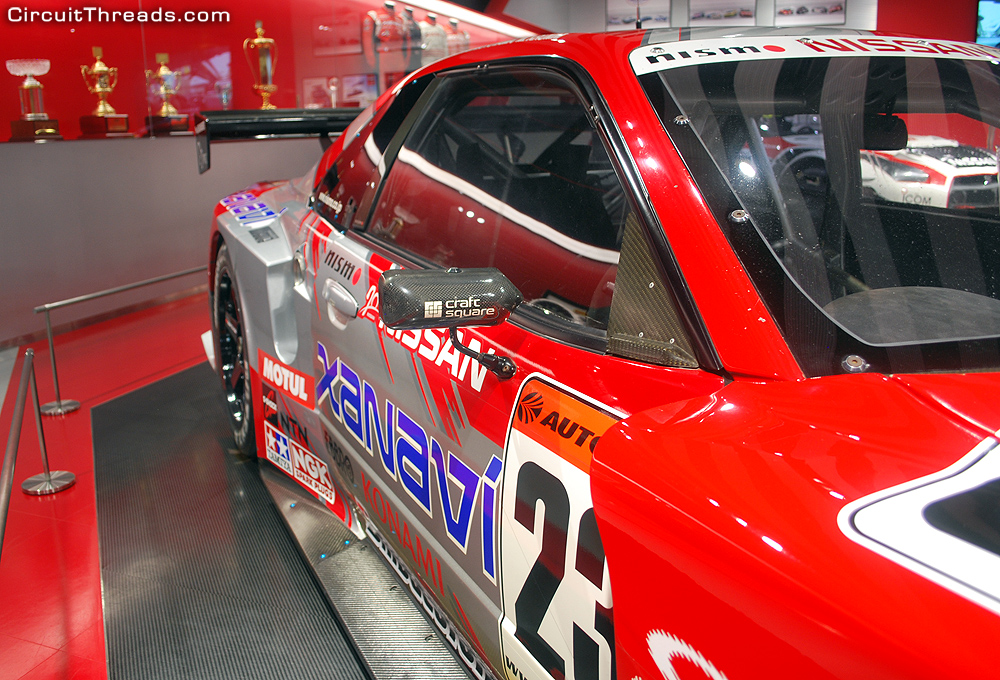 Another winning car on display was the R35 Nismo GT3 GTR. It was so fresh from its win at the Bathurst 12hr Race earlier in the year it hadn’t even been cleaned… 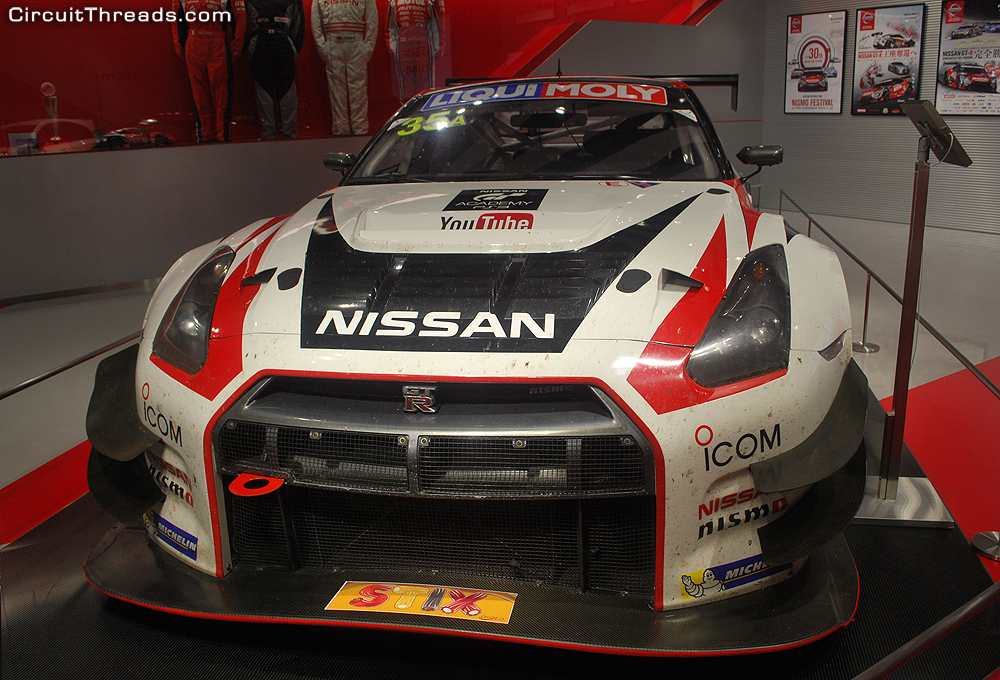 The side of the car looked a bit more like showroom clean though. 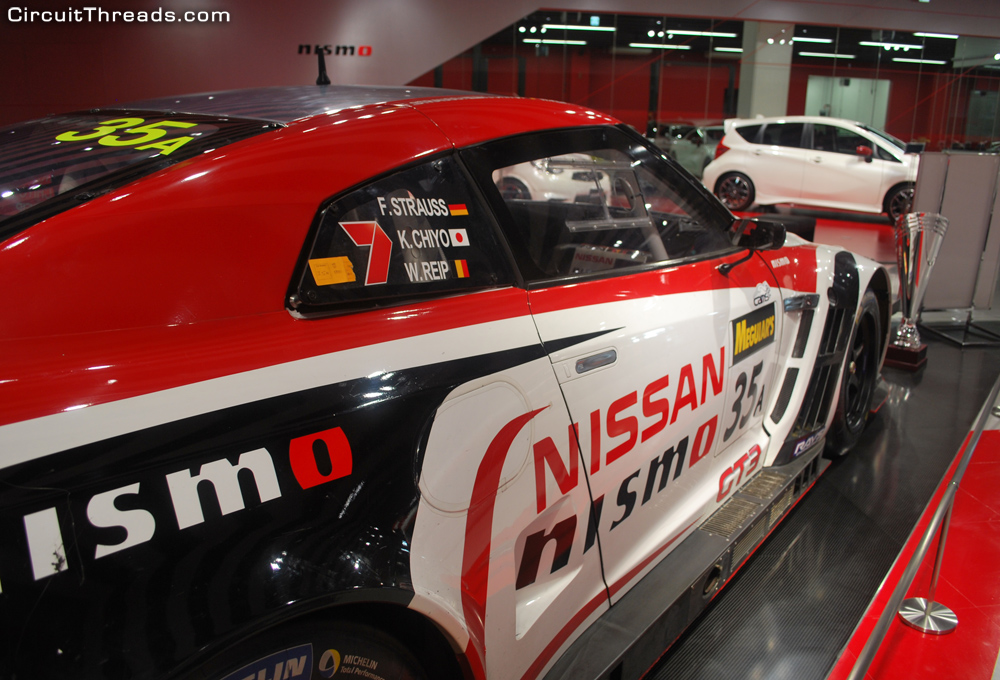 Three brands that combine for an enviable wheel, tyre and brake setup – Rays, Michelin and Brembo. 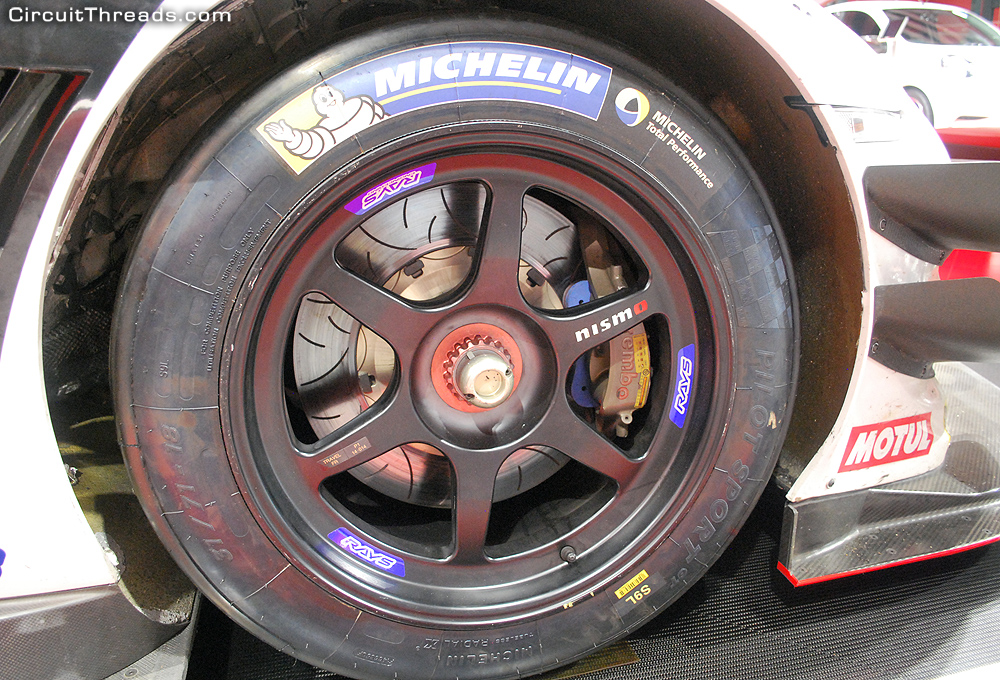 In the corner of the showroom, you can actually see a VR38DETT as used in the GT3 car. The engine on the right, is the 3.4L V8 used in the Super GT R35 machines codenamed VRH34A. 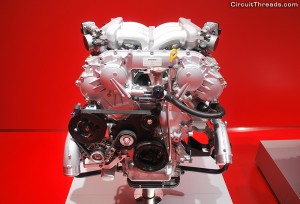 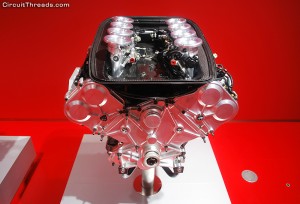 While it was a short visit, it was well worth the trip and a fitting way to end our holiday in Japan. We’ve still got photos from a grassroots drift day to go through but check out the previous posts from D1 GP:

D1GP Round 2 at Suzuka

Hurricane rx7 by @re_amemiya_official 😍 so good

Definitely not your local @supercheap_auto store!