Earlier this year I had the opportunity to tick off one of my bucket list items – to visit the Powerhouse Amuse workshop. Why was it on the bucket list? Isn’t it just another Japanese auto-maniac tourist destination? For me – it was slightly different from that.

A long time ago in High school, a good friend regularly brought back Hot Version VCDs  from Hong Kong (Before DVDs – Asia was flooded with the VCD format which never really took off in Western countries). With some Initial D influence, I regularly paid attention to a particular segment – “Touge battle”. One car in particular at the time was dominating this segment, the Amuse S2000. With no forced induction and 4WD drive train, it still regularly came out on top. To confuse things further it looked like a normal every day slightly modified sports car (when ignoring the enormous wing!). I loved everything about it, the emotions the drivers were describing after driving the car, the humble responses of the Amuse President and the edgy looks from competitors who lined up against it. My curiosity only spiraled out of control from then on, I regularly watched the segment and everything the car and tuner were capable of. They say the greatest form of flattery is imitation and sure enough I spent much of my spare time while studying at University at the local mountain roads doing the same except with a Nissan S13 Non-turbo instead.

In 2008 I had finally purchased my own S2000 and subsequently began putting a few Amuse products on the car. It was upsetting to hear that not long after this the President of Amuse – Hideki Tanabe had passed away. Apparent from Amuse’s products – Hideki was well known to be a perfectionist and carry immense passion for his love of cars.  As the infamous Tsuchiya described during the tribute segment of a Hot Version volume – where other car tuners will work on a car to a certain level and think – that’s enough, Hideki would take it to the next level. Whether this would carry on to Hideki’s successor, was another thing but soon to be debunked when I went to pay homage to the company that fueled my own passion and equally emptied my wallet.

The morning of the 14th of January – I confirmed that the shop was indeed open seeing as a number of Japanese holidays had just past, the last thing I wanted to do was travel over 2 hours to find a closed shop.  Sure enough with confirmation I hobbled away nursing a busted ankle from a few days before, but was well determined to see this through. Luckily the majority of the trip was via train and where normally I can fall asleep on public transport easily, I was too buzzed to even come close to napping. Once at the closest train station – I hailed a cab and made my way finally to the place I had been looking forward to for so long. 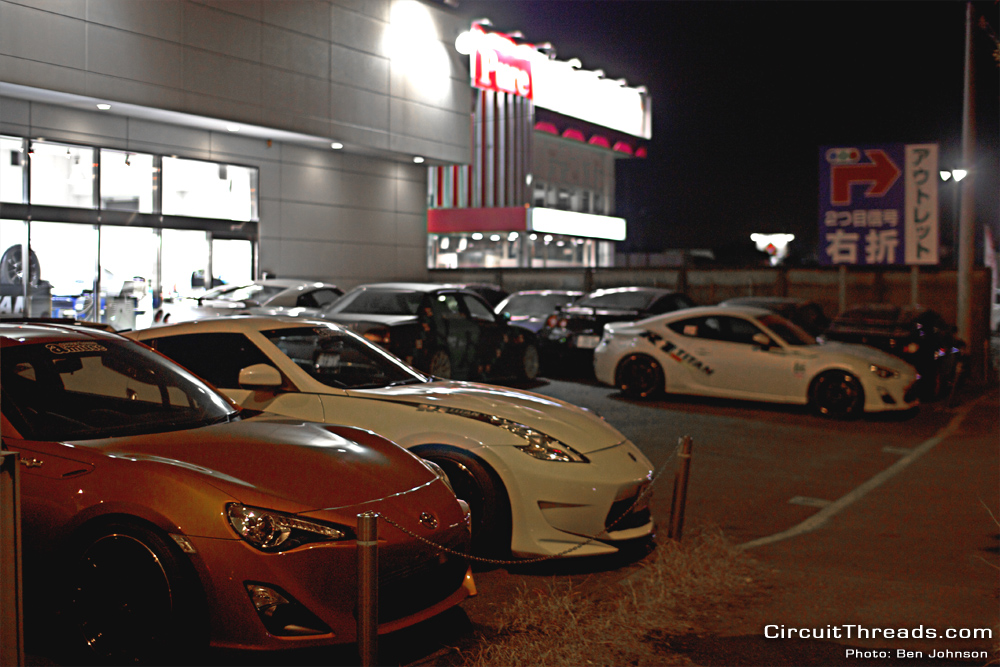 It was easy to tell I had arrived at the right place. A number of Japanese sports cars lined the front yard, from demo cars to customer cars. Hobbling through the front yard and into the show room, while ogling at everything on display – I was greeted by one of the staff members who recognized me as the person who called earlier from Australia. 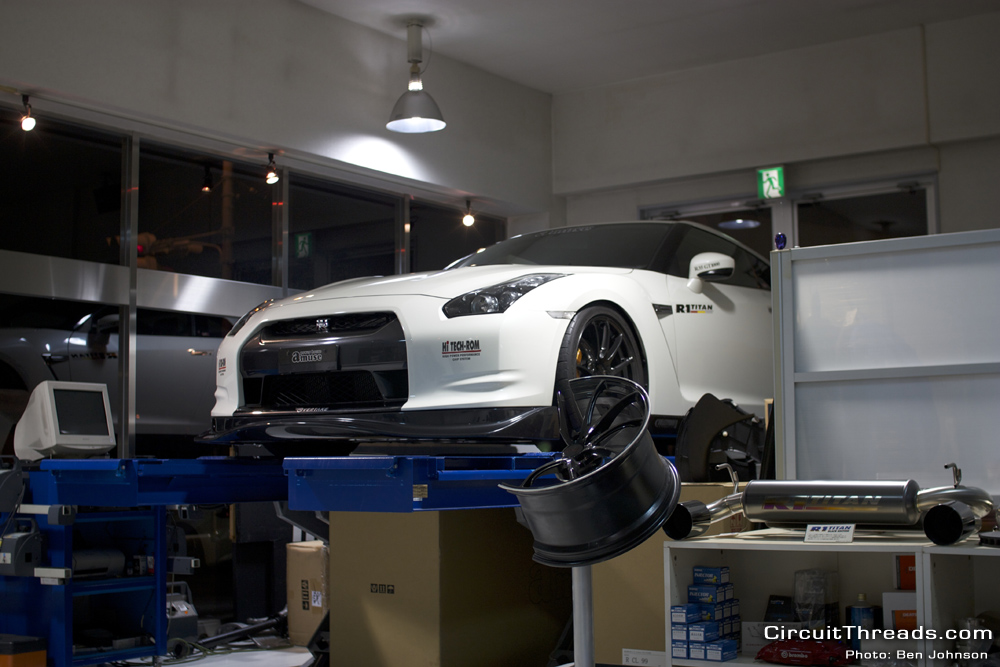 I was offered a seat and some tea then not long after, Hitoshi Matsui – the President of Amuse soon emerged from behind a partition and greeted me. My Japanese is pretty average but we both managed somehow. I explained how much I loved Amuse and showed him pictures of my own car which adorned the R1 front bar and carbon GT wing. He was curious to find out particular settings and what was done to the car. This soon evolved into talk about time attack and after showing him a few videos, Hitoshi identified a few things which I knew from driving the car but he noticed simply by watching the videos. Using a miniature model Nissan 370Z in Amuse Legalo dress, he described my car’s behavior, my driving style and the consequences of it through out some of the corners. I was quite surprised he was able to pick up on so much without sitting in the car. What surprised me even further was his intense knowledge of S2000s in general when he started listing OEM individual sway bar specifications, and differences between AP1 and AP2 models even down to the rear hub knuckles. 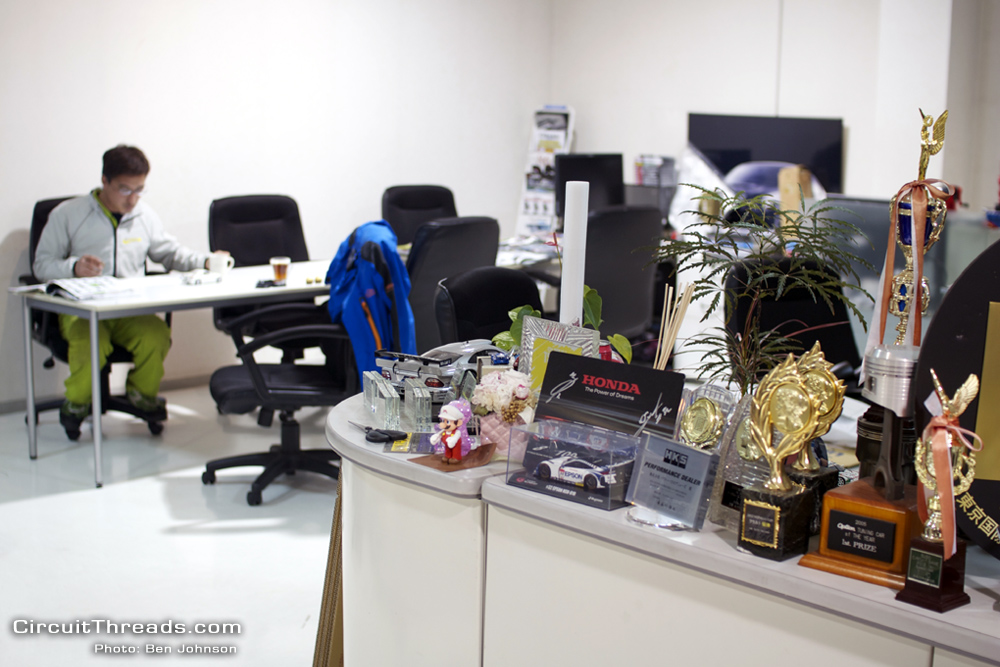 Hitoshi was called away a number of times to tend to phone calls but came back each time to suggest potential changes that could help stabilize the car while scribbling on a piece of paper the options. I was baffled at his knowledge and could easily tell there was a huge passion for his work. I had never come across anyone nearly as knowledgeable about S2000s as Hitoshi. I believe Hitoshi owns an S2000 himself and it was very apparent he had done his own research. I described one of the Amuse S2000s I noticed appearing at track day photos and sure enough, Hitoshi was behind the wheel in all of those pictures. Curious to see what happened to the old front bar it adorned, he pulled it out from the garage and sure enough in a beaten up state it was the same one-off front bar in the pictures. Taking a closer look, I found that he had made his own custom canards from steel and modified the lip of the original R1 front bar to extend out further in an effort to create more down force. This front bar was the prototype for what is now the production Amuse Legalo front bar with canards. It was very obvious there was not only R&D put into the bar but the passion to keep going out on track to test and tune the car with it. After being called away to another phone call, I took the opportunity to actually take a good look around the front yard and workshop. 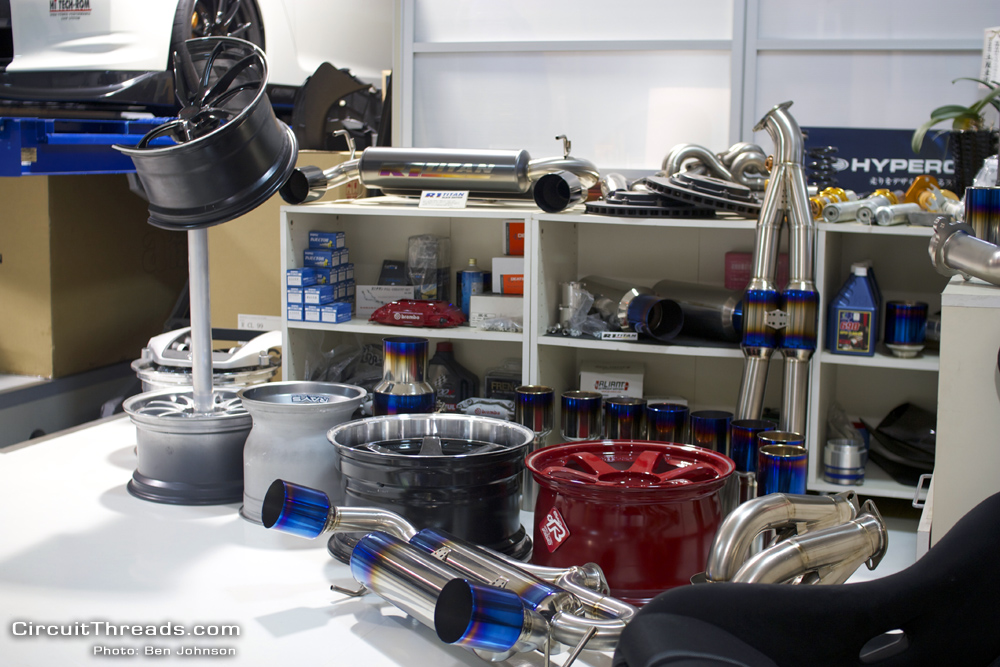 While there wasn’t a large amount of space in the showroom, all the products were exceptionally clean. Having owned an Amuse exhaust before, I always loved the attention to detail much of their exhaust components have and spent most of my time simply staring. 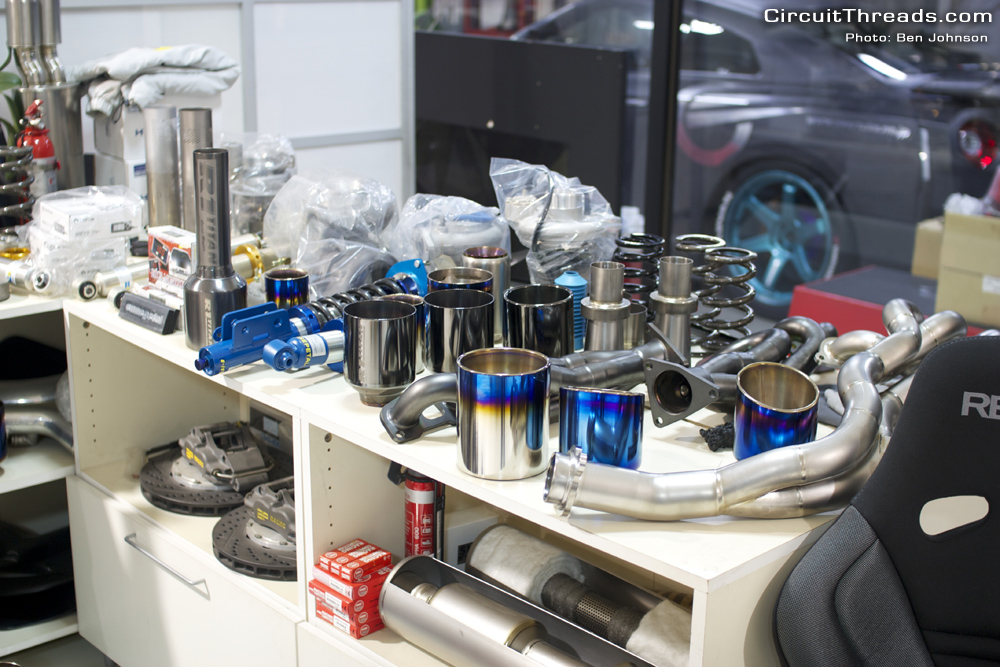 During my visit, Amuse were working on the Overtake R35 GT-R which looms in the background above. 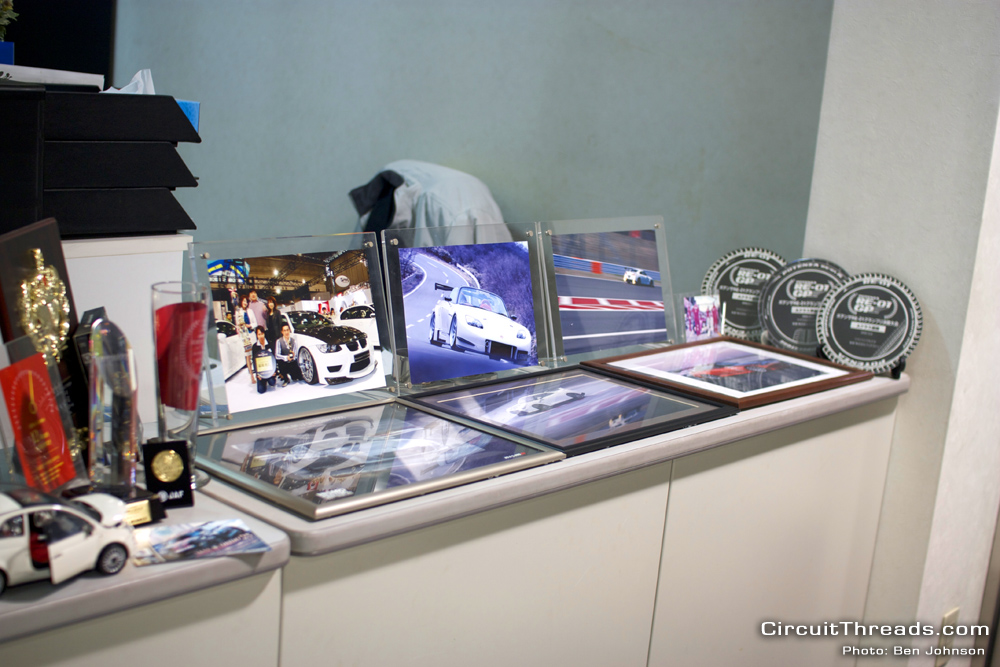 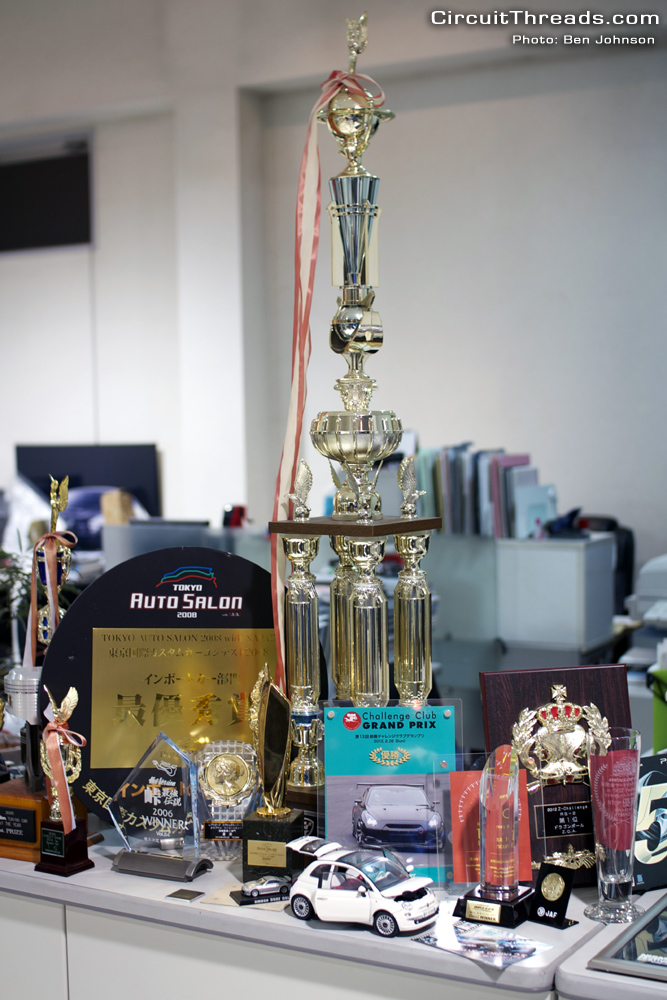 I hadn’t realized how many motorsport and show events Amuse had partaken in. Trophies and professional photos lined the front entrance – a testament to Hideki’s original ideology and success. 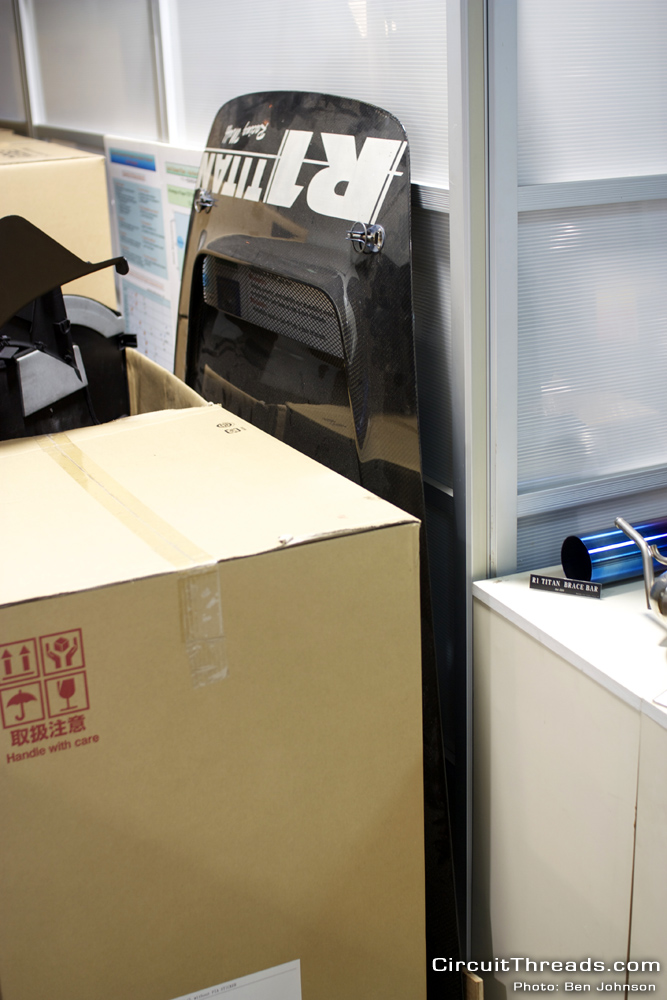 Hitoshi revealed that the original Amuse S2000 from the Hot Version videos was being kept off site. But I found tucked away what looks like it’s bonnet. 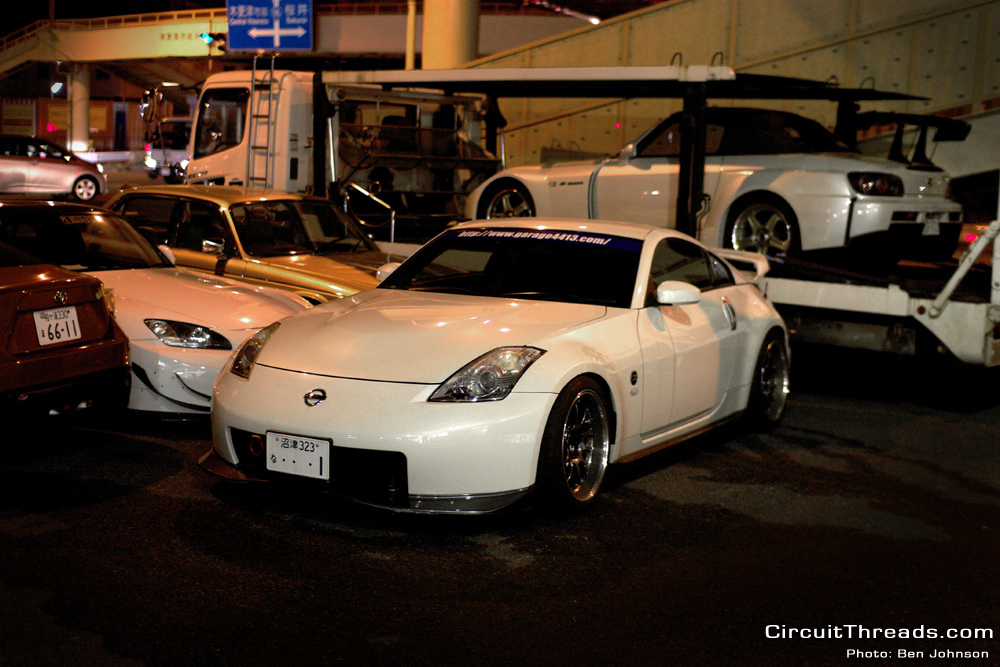 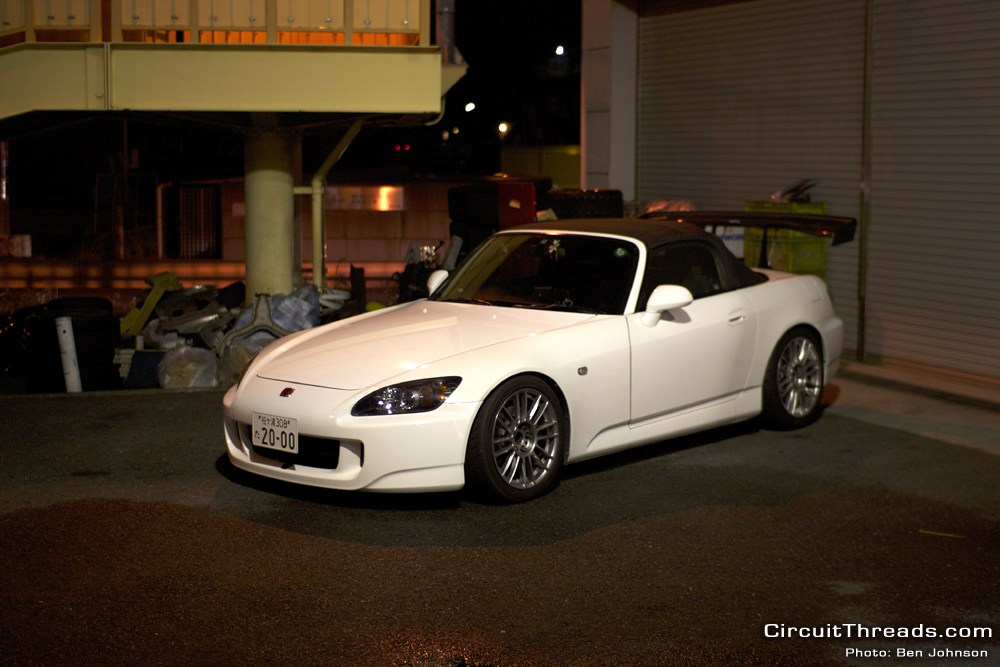 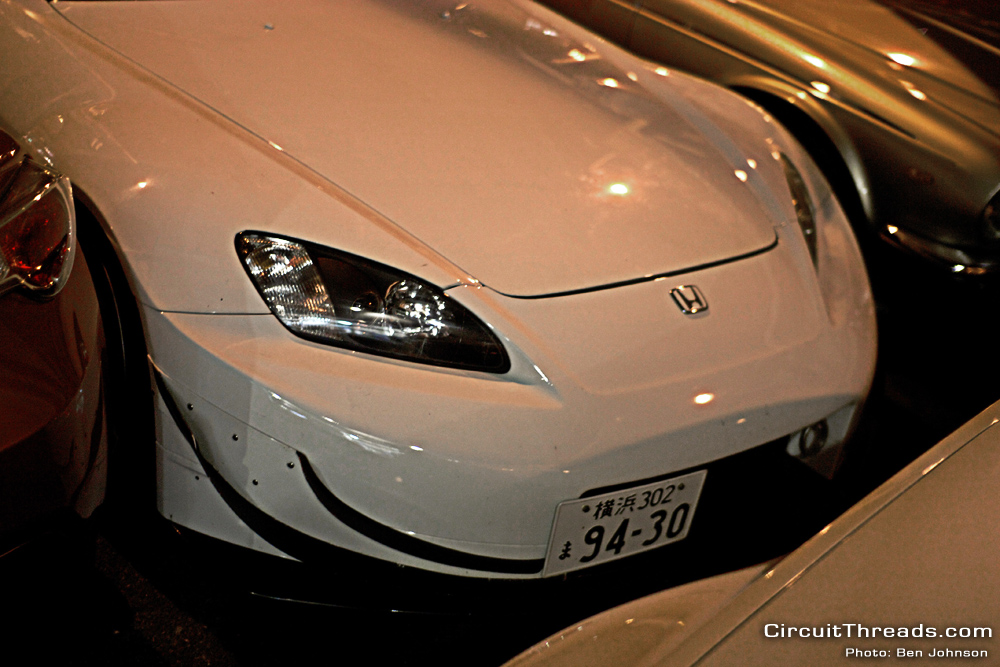 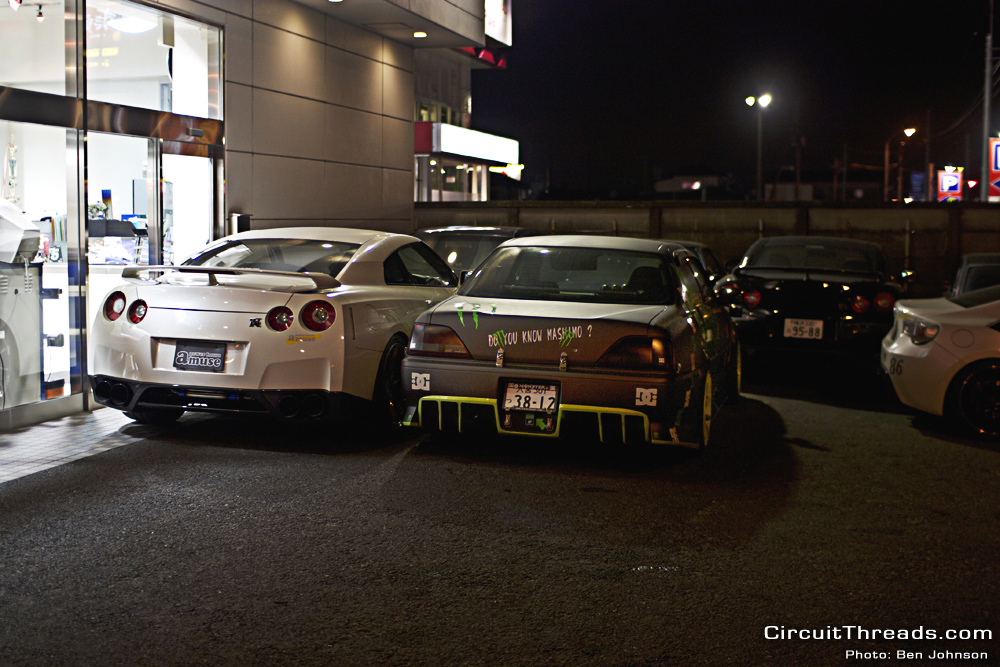 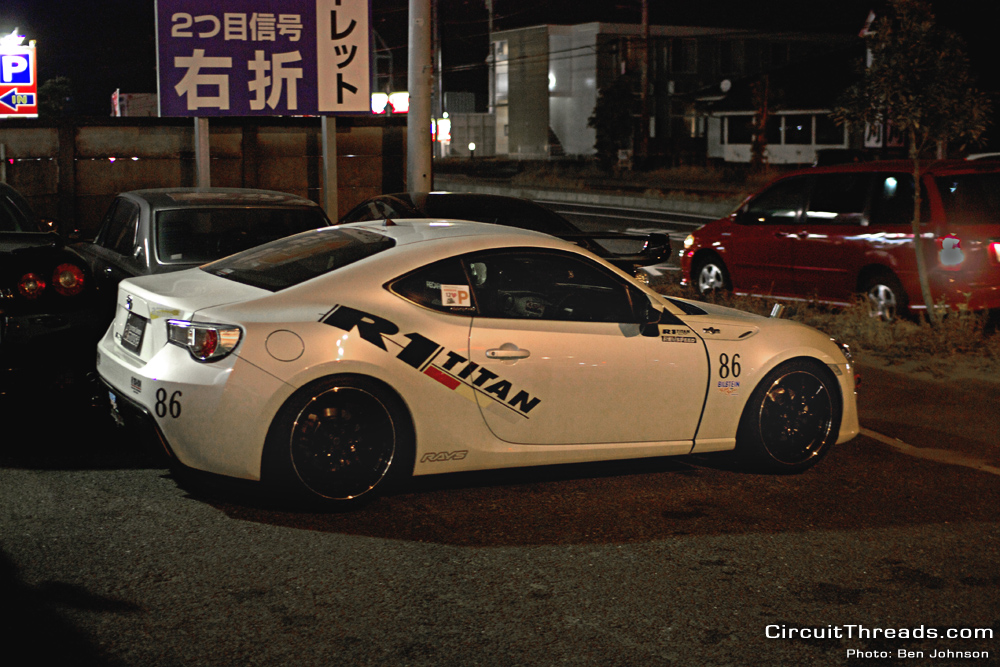 After being offered a refill of tea and some chocolates by one of the staff (I had completely neglected my stomach thanks to my fan boy giddiness), I soon realized that I had spent well over 2 hours there chatting and briefly wandering around the shop. It was nearing closing time and was quite dark outside already, I decided it was time to leave. The head mechanic helped me take a mandatory fan picture with Hitoshi and the Amuse R35 Phantom GT-R. 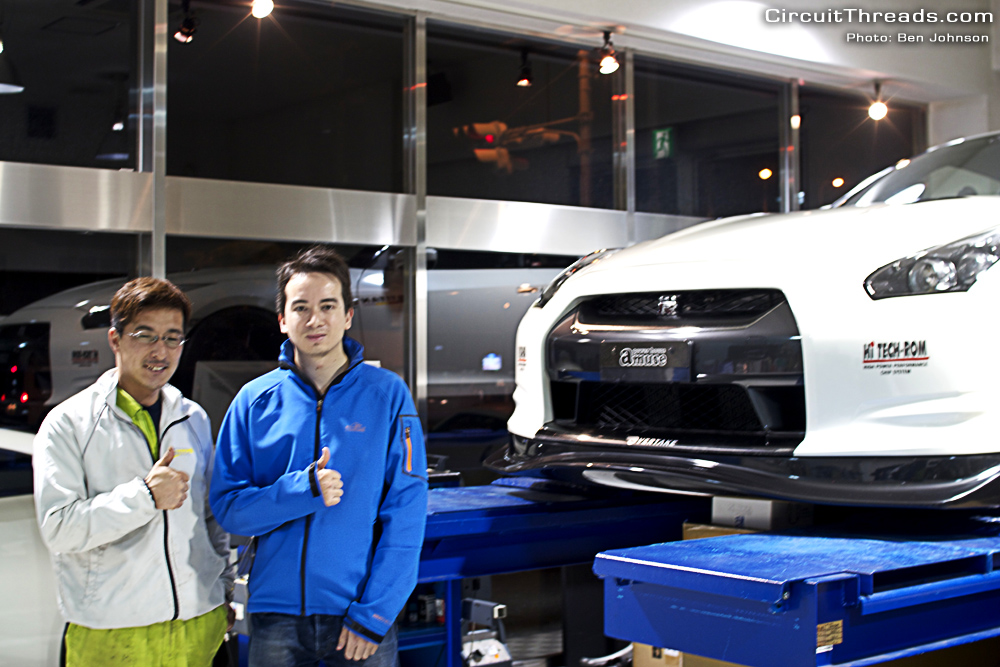 In parting, Hitoshi presented me with some small Amuse branded gifts and upon finding out I was hunting for a taxi, he also kindly offered me a ride to the train station. I was incredibly thankful for all the knowledge and hospitality he had shown me. As we said our farewells, I also found my ride to the station was actually in the Ericsson Amuse E92 M3 with the head mechanic at the wheel. If what I had experienced wasn’t enough, this certainly topped it all off. While being driven to the station, I took the opportunity to ask the head mechanic on his thoughts between the S2000, 370Z and M3 at the track which soon lead to a demonstration of what the M3 was capable of which included a bit of sideways action. After arriving at the station, I thanked him for the ride and realized I had a smile plastered on my face which didn’t relax until much later.

While a bit sad with my departure from it all, I was quite happy to see that the original ideology behind Amuse was very much alive.

Feel free to check out their main website at http://www.webamuse.co.jp/

Make sure this account has posts available on instagram.com.